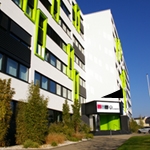 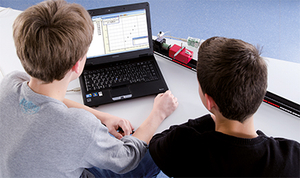 The Pocket-CASSY 2 Bluetooth student interface is the ideal solution for making measurements in student experiments with the help of PCs and laptops. The measuring instrument stands out for its compact design and obviously thanks to its capability to perform measurements wirelessly. It connects to the class's PCs or laptops via Bluetooth. Student experiments on the laws of motion are particularly suitable for such wireless measurement. Imagine what a mess of wires you might end up with for experiments on rotary motions. It is also best-suited for experiments to be carried out at multiple student stations. The Bluetooth connection established by Pocket-CASSY 2 is highly stable and even has a range of 20 m in unobstructed line of sight. 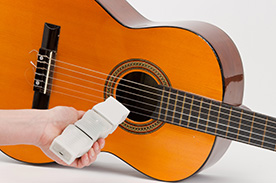 Pocket-CASSY 2 can also optionally be connected to computers/laptops via USB. Operation is really simple. Once a connection is made, there is a button on the module itself to start and stop recording of measurements. In addition, colour LEDs indicate that the module has an established connection and also whether the battery is gradually going flat. The inexpensive interface is also ultra-light, weighing just 100 grams without the battery, but is nevertheless tough and sturdy.

Wide range of measurements possible thanks to CASSY sensors

For the most versatile experiment needs, Pocket-CASSY 2 is also compatible with all CASSY S sensors. These are simple plugged into the CASSY sensor socket. The sensors are automatically detected by the CASSY Lab 2 measurement software running on computers and laptops.

For more detailed information on the Pocket-CASSY 2 (524 018) simply click here:

Rapid charging as part of the set

Pocket-CASSY 2 Bluetooth's rechargeable batteries can quickly and easily be recharged after their use in measurements. An LED lights up red to warn that a battery is running low. Multiple Pocket-CASSY batteries can easily be plugged in in a matter of seconds. Afterwards the recharging is done with just a single plug-in power supply. The battery cascade indicates the charging progress at all times.

We offer a starter package for Pocket-CASSY 2 Bluetooth including the UIP sensor S, CASSY Lab 2 software and the Bluetooth dongle. UIP sensor S has both voltage and current inputs. This enables the following experiments to be carried out, for example: Voltage and current measurements, Ohm's law, electrical oscillations, characteristic curves, AC circuits and active power.

You can get your personal offer on the Pocket-CASSY 2 Bluetooth starter set HERE.